Where are you from?  Originally from Long Island (Woodmere, New York), moved with family to Chapel Hill in 1977.

What are three words your friends would use to describe you?  Strange, one of a kind.

Why do you run?  For the journey, for the friendships, for the races, for feeling better, plus it’s a full participation sport.

What is your favorite thing about the Station Pub Run?  The friendships, the acceptance of all runners. the fun! Many of my friends from other pub runs decided to make The Station Pub run home. I find this run one of the most engaging and fun runs in the Chapel Hill/Carrboro area. Just a good group people!

Describe the most recent (appropriate ☺) photo you took with your phone:  Literally of my good friend finishing her first marathon ever!

What is the best piece of advice you ever received, and who gave it to you?  It’s all about the journey.

Tell us something about yourself that not many people know:  I played the national anthem on clarinet with my Junior High School Band terribly at Yankee Stadium.

What is something you have done recently, or are about to do, that you are proud of?  Just finished the Richmond Marathon with a 15 minute PR. Love the Galloway run/walk method. Love to find ways to remember things about what people are interested in and to help them out. I am proud of being interested in many different things. Being eclectic.

Please share your favorite quote or slogan:  “The reason mainstream is a stream is because of its shallowness.” -- George Carlin 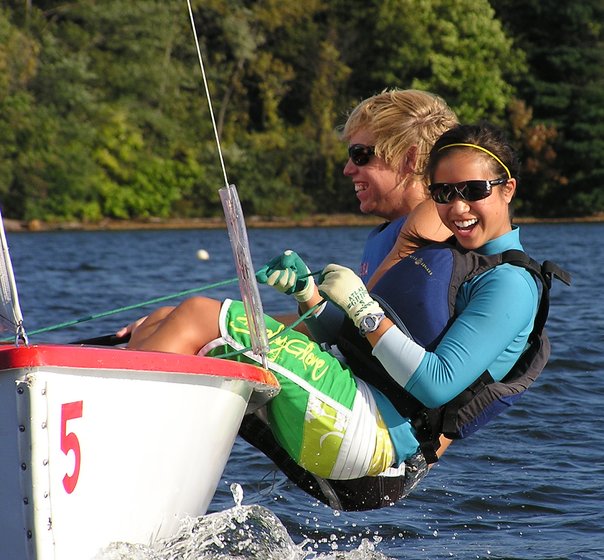 Where are you from?  The Woodlands, Texas, which is a Pleasantville-like, master-planned community north of Houston. My high school, having 3000 students, produced some pretty good athletes like Danny Amendola (2-time Superbowl Champion), Kyle Drabek (MLB), and Laura Wilkinson (gold medal Olympian diver).

How long have you lived in the area?  In 2015, I moved from Boston after my PhD with (then boyfriend, now husband) Theo for my postdoctoral research position in the Neuroscience department at UNC. Carrboro has been a fun, new home for us, so we got married last November locally at the Barn at Valhalla in Chapel Hill.

What are three words your friends would use to describe you?  Upbeat, driven, bubbly. Lab mates have deemed my spirit animal as a quokka. They’re small marsupials that smile a lot.

Why do you run?  I run to stay fit and keep in weekly touch with friends. I’m a soccer player and a sailor, and sailing is a bit more difficult to come by during the week (unlike Boston), so running was a nice alternative to social exercise mid-week after a sedentary science day. Also, I like how running is inclusive on shape and ability while being a sport that you can improve upon, too.

Why did you decide to join the Station Pub Run?  Lab mate Dan, aka Dantelope, recommended Station Pub Run to us. Then, when the Binkleys gave the stamp of approval, we knew it would be a good time!

What is your favorite thing about the Station Pub Run?  We are sticking with it because the community really likes running and drinking. But the beer raffle and Crossties punch cards (especially a pooled family card) are additional perks!

Describe the most recent (appropriate ☺) photo you took with your phone:  On Monday I took a photo of a spool of tungsten wire for making brain stimulating electrodes. For context, I’m a neuroscientist who researches how alcohol and stress interact in brain circuits using mice as models. We can electrically evoke currents to measure synaptic strength, so I sent my science friend a photo of the wire that we use.

What is the best piece of advice you ever received, and who gave it to you?  “What would you attempt to do if you knew you could not fail?” My high school world geography teacher gave me a paperweight with the saying on it. I like the bold statement about courage.

If you could have any talent or skill in the entire world, without needing to practice and money was no limitation, what would it be?  To be a polyglot, for sure. I speak Spanish and can understand some Tagalog (Philippines). Duolingo was good for learning basic French and Italian for international research conferences, but it would be a secret weapon to know the world’s languages while traveling. Gotta know all the local foods and drinks.

Tell us something about yourself that not many people know:  In high school I was our region’s president of the National Charity League for mothers and daughters, becoming a “debutante” presented in a white ball gown equipped with manners and service to Texan society. Our emcee of the event was my influential high school teacher that eventually became Theo and my wedding officiant 12 years later.

What is something you have done recently, or are about to do, that you are proud of?  I just published my first, first-author paper of my postdoctoral research here at UNC. It describes how a single exposure to a fox scent, a threatening predator odor, for mice can have significant alterations in excitatory neurotransmission in specific neurons in the prefrontal cortex, an area that can deteriorate after chronic stress. We can reduce the stress signals on the brain and distress behavior by applying a drug that blocks receptors for a stress hormone.

Please share your favorite quote or slogan:  My daily mantra is, “work hard, play hard.” I must say that this lifestyle almost killed me in college due to lack of sleep, so I have revised to “everything in moderation, including moderation.”

Anything else you’d like to share with us?!  In my first year of graduate school I published a protocol that encourages mice to voluntarily drink large amounts of alcohol. It’s currently being used around the world to study the biology of alcohol drinking, and has over 100 citations (when others reference your work, not fines issued by law enforcement).