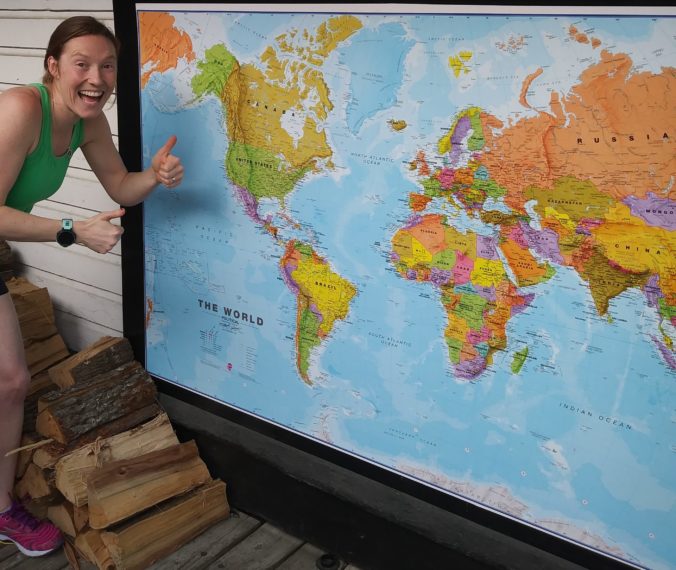 The Pint Cup that is Building a Community

April 21, 2018 / Steph Bryant / Comments Off on The Pint Cup that is Building a Community

Guys, I have Station Pub Run on my mind, ALL THE TIME. Seriously, the amazing and crazy ideas that I have for our running group spin through my head all hours of the day. I feel like I have a high school crush on SPR - it's the first thing I think about when I wake up in the morning, and it often enters my thoughts as I drift to sleep at night. There are just so many exciting things going on, and so many wonderful people in our group, I can't help it. A recent Saturday morning was no exception. Let me set the scene for you:

It was around 6:30am, and I was already several miles into my weekly long run.  The sky had just stared turning from black to a deep shade of blue with the earliest hint of the sun rising behind the tree-covered horizon.  In the momentary silence between songs playing from my iPod, I caught the pitter patter of my feet on the pavement, and the rhythmic pattern of my breath. I was reflecting on the unique community that is blossoming at our dear Station Pub Run, when Journey's "Don't Stop Believing" started coursing through my headphones. And let me tell you - my train of thought at the time, combined with that ever-inspiring electric guitar - it gave me the chills, and a newfound pep in my step.

I was thinking about how the SPR Pint Cup deserves a lot credit for the community that has formed at Station Pub Run. What started as a scheme-brained idea to get our logo printed onto a stainless steel cup has turned into an opportunity for runners to keep in touch with each other while travelling the world. I mean think about it - with most other pub runs you show up, run, drink, go home. You make a few friends, maybe even a lot of friends. But when you leave the pub run, pub run is over until the next week.

I did a little digging into the SPR newsletter archive (aka my sent email folder) and found that on August 8th, 2017 I wrote the following note to the Pub Run newsletter subscribers:

Pint Cup soaking up some rays at Topsail Beach.

"In case you missed it - THE STATION PUB RUN PINT CUPS ARE IN! THEY ARE AWESOME! I would officially like to start a tradition of travelling with said pint cups so we can see how far across the globe these little guys can go. (Michelle, I will be shipping yours to Columbia soon - tell me your address.) Much to Eric's chagrin, I kicked off our new tradition by photographing my cup on the beach this past weekend. I got weird looks from strangers, and YOU CAN TOO!"

I remember when I wrote this - I figured that no one would actually take me seriously, and that the only time this little pint cup would make a cameo in a photo would be if it slipped into the occasional weekly running group photo. I could picture everyone reading my email above and scoffing at my pleas to dedicate precious luggage space to a ridiculous cup, not to mention take photos of it in public spaces. I was also extremely worried that no one was actually going to buy a pint cup from me, leaving me with 90 stainless steel cups I would have to creatively get rid of.

You can imagine my surprise, and complete and utter joy, when three weeks later the Pint Cup showed up in not one, but TWO places on the same day: Grandfather Mountain, NC and Detifoss Waterfall, Iceland! My heart swelled at the dedication from our fellow runners, and I realized on that very day that our running group really has something special. (Shout out to Sarah and Bill for believing in the cause, and helping to kick start this great tradition!!) Fast forward to today. It has not even been a full year since the introduction of the Pint Cup into our running group, and it has already traveled to several states, and many more countries.

The pint cup stands for so much more than a receptacle for beer. By packing your pint cups when you go on trips near and far, Station Pub Runners are doing more than just humoring a silly request to photograph a cup. You're inviting us to share a part of your worldly adventures, and are actively thinking about us during said adventures. You're having life-changing experiences, whether big or small, and you're sharing it with us as though we are family. Hell, the SPR Pint Cup has been the witness to an ENGAGEMENT for goodness sake! I might argue that's BETTER than family! 😀

It warms my heart every time a new photo of a Pint Cup sighting lands on our group's Facebook page or in my inbox. Just this morning I woke up to a text from a runner sending me a group photo: Four Pub Runners posing

with their pint cups in Zion National Park where they've headed to run a 50k this weekend.

It's one thing for an organization to have shirts that members travel in and photograph - that's easy; it's quite a different story when the traveling talisman that gets added to the vacation packing list is a pint cup! You all are truly dedicated to the community that we have cultivated at The Station Pub Run. Thank you all for supporting The Station Pub Run. Thank you for thinking of us (and including us!) as you adventure to new cities, states, and countries around the world. And thank you for inspiring us to live our best lives every day!

P.S. If you happened upon this blog by randomly surfing the interwebs, I encourage you to join us at the Station Pub Run! YOU TOO can own one of these lovely pint cups. And the people here are pretty cool too. 🙂